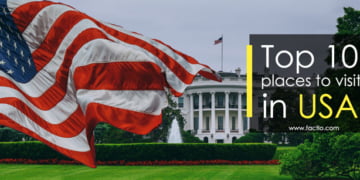 Top 10 most famous landmarks in USA that everyone must visit

Top 10 most famous landmarks in USA that everyone must visit

in Architecture, Culture
Reading Time: 11 mins read
A A
0

Famous Landmarks in the USA: A landmark basically means something conspicuous that marks a place. It can be anything that’s easily recognized from a distance, that has historical, cultural, or aesthetic importance. It could be a natural feature of a landscape or even a man-made structure. We use the word ‘landmark’ also to mean a significant event to mark a turning point.

The United States is the world’s third most visited country in terms of tourists followed by France and Spain. In the U.S., tourism is among the three largest employers and it takes care of 1.19 billion trips tourists. There are around 2500 registered National Historic Landmarks (NHL) recognized by the United States government. We have listed here 10 Most popular tourist spots to visit in the United States. And yes, these are not ranked in any manner, just random picks by the editor.

When you think of the USA, the first thing that comes to the mind is the Statue of Liberty – a colossal statue of Roman goddess- Libert as holding aloft a torch, facing the Atlantic Ocean. The Statue of Liberty was a gift from the people of France to the citizens of the USA to celebrate the 100th year of the Declaration of Independence, which fell on the 4th of July, 1876. 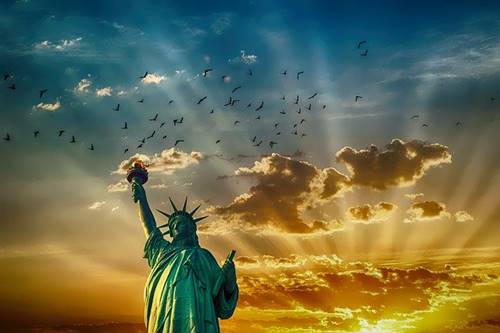 The Statue of Liberty stands on Liberty Island, in New York Bay and is one of the most famous landmarks in the USA. It is over 46 meters taiL It is made of pure copper, and holds a gold plated torch in one hand to welcome those arriving in America from across the ocean. The left-hand holds a stone tablet representing the Declaration of Independence.

There are broken chains representing freedom from bonds at the feet of the statue, and on its head, there is a crown with seven points. These seven points symbolize the seven seas and seven continents- and also the fact that people from all over the world are welcome in America. The Statue of Liberty was designed by French sculptor Auguste Bartholdi.

The Empire State Building in New York is 381 meters tall, and when it opened in May 1931, it was the tallest building in the world. It was the icon of New York City, the symbol of Man’s dreams to soar higher and higher. Since then, it has captured the attention of generations, as more and more tourists flock to see it every year. 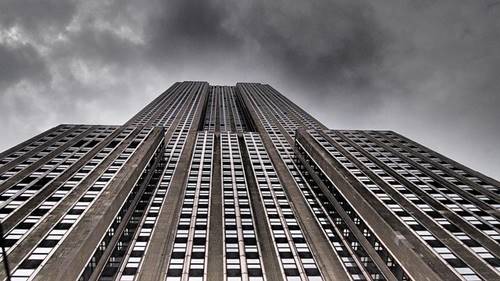 This skyscraper is 102 stories tall and was designed by William Lamb. There are 1086 steps from the lobby to the 102nd floor, and the building has 73 elevators and 6514 windows. The Empire State Building is considered to be an Art Deco masterpiece.

The Golden Gate Bridge is one of the world’s most beautiful bridges and is an engineering marvel. Its soaring towers, sweeping main cables, and distinctive orange color have made it one of the most famous landmarks in the world. 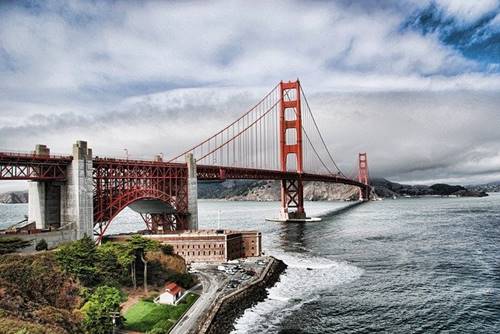 The foundation piers had to be sunk into the violent, pounding waters of the open sea, something that was thought to be impossible. Today, the resulting bridge provides a connection between -San Francisco and the surrounding northern counties. The Golden Gate Bridge is an internationally recognized symbol of San Francisco and one of the most visited landmarks in the USA.

Hoover Dam is located on the Colorado River, between Arizona and Nevada. The dam is named after America’s 31st president and is the highest concrete dam in the Western Hemisphere, standing at more than 220 meters above the Colorado River. It is one of the country’s largest hydroelectric power facilities. 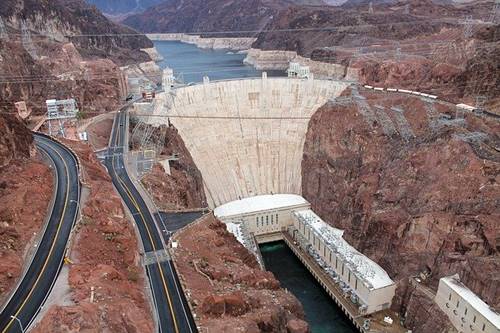 Hoover Dam is a concrete arch-gravity dam. This means that the water load is borne by gravity action and horizontal arch action. Construction began on the Hoover Dam in 1930. About 21,000 people worked on the project, with about 3,500 people working at the site each day. There is enough concrete in the dam to cover a highway 4.87 meters wide from San Francisco to New York City.

The Black Hills of South Dakota, USA is the backdrop for the world’s greatest mountain carving at Mount Rushmore. Here, the faces of four great American Presidents, George Washington, Thomas Jefferson, Theodore Roosevelt, and Abraham Lincoln have been carved into the side of the 1745 meter mountain. 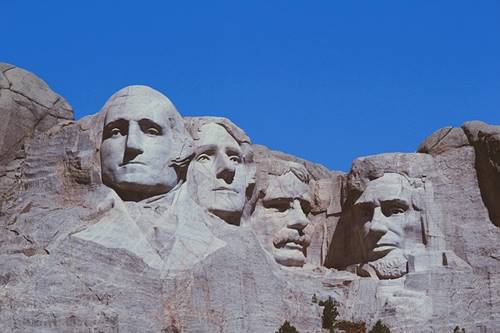 Carved at a height of 152 meters, each face is an amazing 18-meter high sculpture of epic proportions. The sculptor, Gutzon Borglum began drilling into the 1745 meter high mountain in 1927 and took 14 years to complete the project.

The proportions of each face were worked out on scale models and then transferred to the granite rock face. Every year, millions of people visit this shrine of democracy at Mount Rushmore. It is considered to be a symbol of freedom all over the world and one of the most popular landmarks in the USA.

The White House in Washington DC is a monument steeped in history. It was George Washington, the first President of the US, who chose the site for the White House. The cornerstone was laid in 1792, and a design submitted by Irish-born architect James Hoban was chosen. 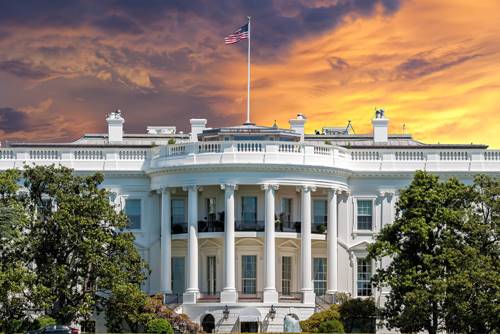 After eight years of construction, President John Adams moved into the White House in 1800, and it has been the home of American presidents since then. This beautiful white building has 132 rooms, and 35 bathrooms in, and is the only building in the world that is simultaneously the home of a head of state, the executive office of a head of state and is regularly open to the public for tours.

Yellowstone Park is the world’s first National Park. It was established in 1872 to preserve the natural wonders of one of the last, nearly intact, natural ecosystems in the Earth’s temperate zone. The idea of national parks started with Yellowstone and spread worldwide.

The Yellowstone National Park is a truly enormous landmark in the USA. Its vast forests cover nearly 9000 square kilometers in three states. It is most famous for its geysers of which there are more than 300- this makes up two-thirds of all the geysers on the planet. 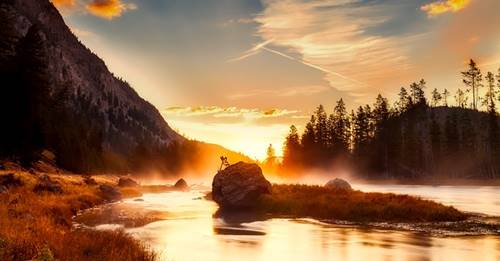 The extraordinary treasures of Yellowstone include, besides the world’s largest collection of geysers, the Grand Canyon of the Yellowstone River, numerous waterfalls, and great herds of wildlife as well. The park has thousands of hot springs, mud pots, and fumaroles, and over 150 species of fossil plants, ranging from small ferns up to large sequoia, and many of her tree species. The park lies at the headwaters of three major rivers.

The Yellowstone River is a major tributary of the Missouri River that flows via the Mississippi to the Gulf of Mexico. The Fire hole and Gibbon rivers unite to form the Madison, which also joins Missouri. The Snake River rises near the park’s south boundary and joins the Columbia to flow into the Pacific.

Yellowstone Lake is the largest lake at high elevation in North America, while the Lower Yellowstone Falls is the highest of more than 40 named waterfalls in the park. The park’s bison are the only remaining wild, continuously free-ranging, herds that once covered the Great Plains.

In fact, Yellowstone National Park has become one of North America’s foremost refuges for rare plant and animal species. Magnificent scenery, rare plants and animals, awe-inspiring geysers, and immense diversity all combine to make Yellowstone Park one of the truly exceptional landmarks in the USA.

Over two billion years ago, Nature began to craft what is today one of the most dramatic natural wonders of this planet- the Grand Canyon, in Arizona, USA. Over 446 kilometers long, 1.60 kilometers deep in places, and 29 kilometers across at its widest, the Grand Canyon is a testimonial to the erosive power of water, ice, and wind.

Carved out by the Colorado River, its vastness takes our breath away, and the insights it gives us into the history of the Earth are invaluable. Here, temple-like buttes, high plateaus, plains, deserts, forests, cinder cones, lava flows, streams, waterfalls, and one of America’s great white water rivers create a spectacular panorama that is truly unforgettable. 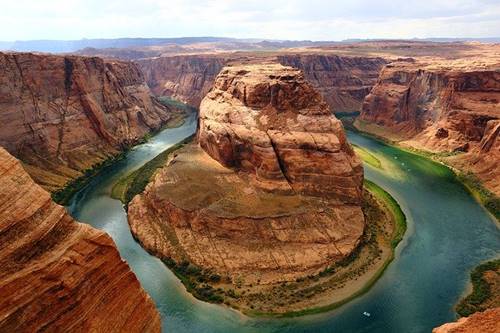 Its geologic record spans all four eras of the Earth’s evolutionary history, as is seen from the numerous caves, fossils and animal remains. The canyon is a vast biological museum, stretching through five different life and vegetation zones.

Over 1,000 plant species have so far been identified as well as 76 mammal, 299 bird, 16 fish, and 41 reptile and amphibian species. The wonder of it all is that the drama that is the Grand Canyon is still going on, as the process of erosion continues.

The Niagara Falls, located on the border between the USA and Canada, may not be the largest, or the tallest waterfall in the world, but it is definitely the most famous. Niagara Falls was carved by centuries of melting glaciers and water erosion.

It is the second-largest waterfall in the world. Niagara Falls is actually made up of three separate falls that are all close in proximity. They are the American Falls, the Bridal Veil Falls, and the Horseshoe Falls. The American Falls are located in the US. 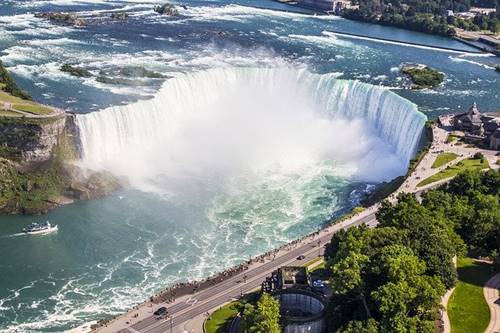 The Horseshoe Falls are located in Canada. The Fallsareextremelywide. The largest, Horseshoe Falls, gets its name from its shape. The water itself is a beautiful blue-green in color, and 6 million q.lbic feet of water hurtles down every minute.

Together, the Falls presents a wondrous spectacle, as great bands of water plummet over the edge, and create a resonating roar down below. Even in winter, when the flow is partially hidden and the edges freeze solid. Niagara Falls reminds us just how amazing our natural world is.

Bryce Canyon is not a canyon at all but a collection of giant natural amphitheaters that are found on the South-Eastern edge of the Paunsagunt Plateau in South Western Utah, USA. It was named after Ebenezer Bryce, a pioneer who settled in the area in 1874. 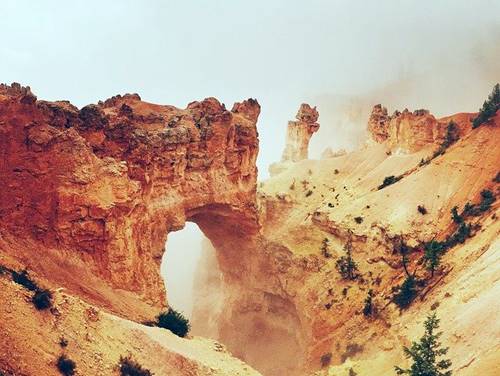 Bryce Canyon is famous for its delicate rock spires called hoodoos that have been formed by the forces of erosion. For millions of years, water has carved Bryce’s rugged landscape. Water splits rock as it freezes and expands in cracks. In summer, runoff from cloudbursts etches into the softer limestones and sluices through the deep clefts.

This erosion has resulted in the creation of colorful pinnacles called hoodoos. The red, orange, and white colors of the rocks make them a spectacular sight indeed. Some local Paiute Indians believe that animallike creatures that changed themselves into people once lived here. But these creatures were bad and were punished by being turned into rocks. The creatures still huddle together here with faces painted just as they were before being turned to stone!