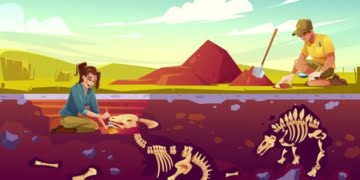 in History, Science
Reading Time: 5 mins read
A A
0 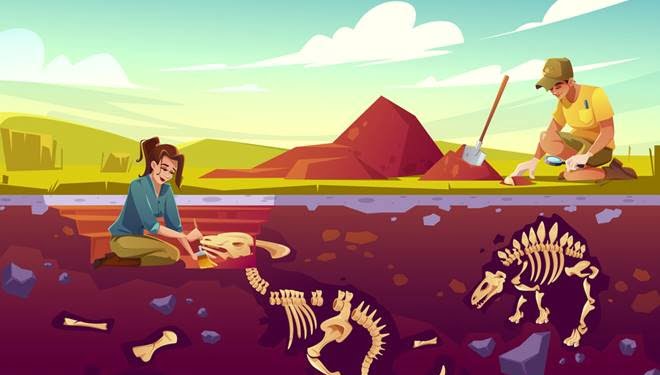 Paleontology is the study of fossils. Paleontology has played a key role in developing the theory of evolution.

Fossils are the remains of animals or plants which once lived on the Earth millions of years ago. When fossils were first discovered, people did not really understand what they were, and so, many myths and folklore developed over time, about where fossils came from.

The coiled shells of some fossils led the Ancient Greeks to believe they were related to the ram-god Ammon. In China, these were also thought to resemble horns, and were called ‘horn stones’. In England, they were believed to be coiled snakes that had somehow lost their heads and turned to stone.

Echinoids, also known as sea urchins, are amongst the most commonly found fossils. In some places, they are considered to be snakes’ eggs, which have the power to protect one from deadly poisons.

Paleontology: Importance in the study of evolution

By reassembling fossil bones, scientists can get an idea of the size and shape of the creatures that inhabited the Earth before the appearance of humans. Teeth and shells that have been fossilized also tell us much about the lifestyle of these creatures. Fossils of insects are often found embedded in amber, which is a transparent rock nodule formed when the resin from trees petrifies.

Small creatures are sometimes trapped inside the amber and are perfectly preserved to give us a glimpse of ancient insects. Trace fossils are also important in the study of evolution. Trace fossils are tunnels, worm casts, and tracks that animals have made on soft sediment that has later hardened into rock. These imprints of animals on the move reveal much about the lives of ancient species, including their size, gait, stride length, and speed. 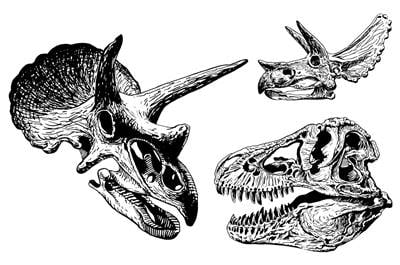 Fossils form when an animal or plant dies in water or nearby places. The water insulates the remains from many of the elements that contribute to decomposition. For example, when an animal has died of old age at the bottom of the sea, bacteria consume the soft body parts but leave the hard exoskeleton intact.

As time passes, sediments bury the exoskeleton. As the sediments continue to pile on, the lower layers become compacted by the weight of the layers on top. Over time, this pressure turns the sediments into rock. As the continental plates move around the Earth, crashing into each other, mountains a reformed. Former sea floors are lifted up and become dry land. Thanks to the movement of the plates, fossils will come closer to the surface, and nearer to discovery by some fortunate fossil hunter.

Fossils are finally revealed through the forces of erosion. Though there are millions of fossils that have been discovered, and millions more waiting to be discovered, fossilization is a rare occurrence. Soft-bodied animals and plants that have no woody parts are rarely fossilized.

People often think of fossils as being mineralized bones or shells stored in museums. However, they can even be any remains or traces of ancient organisms. They can even be footprints, burrows, or casts of bodies, with nothing else surviving. Interpreting fossils is some- times like solving a jigsaw puzzle.

One of the ways of interpreting a fossil is to compare the fossil with the skeleton of a living creature that seems to resemble it. For example, there are many well-preserved fossils of coiled shells of ammonites, which are an extinct group of marine animals with no backbone. However, the soft body parts of these animals have not been preserved. But the fossils can be reconstructed because a modern marine species known as the nautilus is very similar to the ammonites. So, in this case, interpretation is possible.

When only one or two skeletons of a species have been discovered, there is no way of interpreting them correctly. For example, in the case of a dinosaur fossil, what was once interpreted as being a horn is now believed to be a large pointed thumb. Paleontology suggests that until & unless many similar specimens have been found, it is unwise to attempt a species description.

Fossils and the Great Flood

You must all have heard about the Great Flood that swept across the earth in ancient times. Many people believe that thousands of animals that were swept away by the flood eventually became fossils. It is true that conditions during the flood were ideal for ‘fossilizing’ millions of animals, plants, and even dinosaurs.

In fact, thousands of dinosaur bones can be found where they were washed together by violent floodwaters and buried under mud, sand, and rock. Many of the animals were torn apart, and their bones were broken and jumbled-up. The mud and sands hardened like concrete to form the great layers of fossil rocks we find today.

Quick flood burial would be the only way that so many dinosaurs and other things could have become fossilized. Animals and plants will fossilize only if they are buried quickly and deeply – before predators, decay, and weather destroy them. Paleontology does not support this theory, but there are some scientists today who are seeking evidence to support it.

Tags: evolutionpaleontologypaleontology is the study ofstudy of fossils
Previous Post