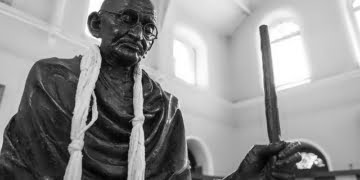 Gandhiji was the greatest leader of modern India. Yet, to millions of people across the world, he was much more than that. To them, he was a saint whose values will have everlasting relevance.

in Biography, History
Reading Time: 9 mins read
A A
0 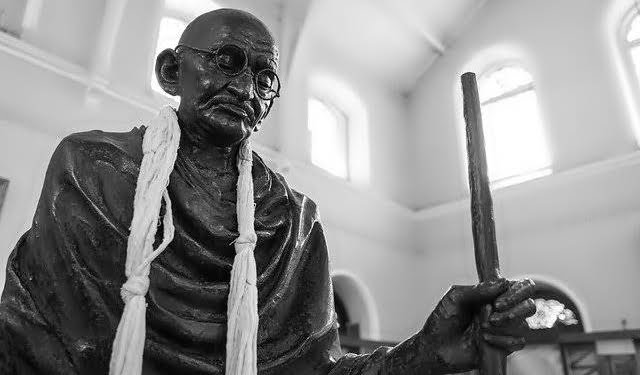 It’s no wonder that the whole world came to worship MK Gandhi as a great soul – a Mahatma for his idea of Non-violence. It was Rabindranath Tagore, the great poet, who first addressed him as ‘Mahatma’, and soon the whole world started using this name with great respect and affection. A truly befitting name for the father of nation India, who represents all that is noble about our great heritage.

Gandhiji’s memory lingers in the minds and hearts of admirers all over the world. Indians can take great pride in the fact that some of the most well-known personalities of the 20th and 21st centuries cite Mahatma as their role model. Barack Obama, the former president of the United States of America had once talked about Gandhi as his ‘real hero’. Dalai Lama, Pearl S. Buck, and Steve Jobs are a few among the long list of his admirers.

American historian, Will Durant, best known for his great work, The Story of Civilization, was an admirer of Gandhiji. The inspiration for Attenborough’s film Gandhi was ‘The Life of Mahatma Gandhi,’ the book written by the celebrated American journalist Louis Fischer. He was a follower of Gandhi. He said on Gandhi’s assassination, “Just an old man in a loincloth in distant India. Yet when he died, humanity wept.” It is no wonder Gandhiji is admired even today. The ardent expression of his will goes beyond the spirit of his Age.

It is the Gandhian Philosophy or idea of non-violence that made India’s struggle for freedom unique in history. Gandhiji taught us that one is blessed to possess non-violence, or ahimsa, in the midst of violence. He objected to violence because it perpetuates hatred. Yet to him, non-violence was not akin to cowardice. He showed the world that non-violence is not a weapon of the weak; on the other hand, it is a weapon that can be tried to express a higher form of courage. Mahatma Gandhi was the first leader in history to use the idea of non-violence to fight such a mighty power. It’s no wonder that Gandhian Philosophy inspired many leaders like Martin Luther King Jr and Nelson Mandela.

Gandhiji was very famous worldwide for his non-violent movements, including indefinite fasts and marches. He was nominated for the Nobel Peace Prize about five times throughout his life. His life and teachings have inspired many revolutionaries and liberationists of the 20th century, and Martin Luther King Jr.of the United States was one of them. Martin Luther King Jr., the key figure in the Civil Rights Movement in the USA, was greatly inspired by the thoughts and actions of Mahatma Gandhi. He acknowledged this fact many times himself.

From his schooldays in Pennsylvania, Martin Luther King Jr. was drawn towards Gandhiji’s philosophy and actions. When he was leading the struggle for achieving civil liberty for African- American citizens, he incorporated Gandhian principles. To fight for liberty, he declared his two weapons as faith in God, and non-violence. His incorporation of nonviolence started with the famous ‘Bus-Boycott Movement’ in the country. King Jr. had claimed that “the spirit of passive resistance came to me from the Bible and Jesus. But the techniques of execution came from Gandhi”. Many Gandhian ideals like love, non-violence, and self -sacrifice did go into the formulation of the philosophy and technique of King’s social protest movement.

Nelson Mandela was the great leader who fought for ending apartheid, a system that separated whites from non-whites in South Africa. Mandela traveled throughout South Africa and encouraged people to take part in non-violent demonstrations against the racial segregation policies of the government. He was arrested for anti-government activities and eventually, sentenced to life in prison in 1964. Protests against this were held not only in South Africa but around the world.

On February 11th, 1990, South African president F.W. de Klerk released Mandela from prison, and the two worked together to end apartheid. Later, they won the Nobel Prize for their efforts. In 1994, for the first time in history, non-whites were allowed to vote in the elections. In that election, Mandela was elected President by a huge majority. Mandela was a true follower of Gandhian philosophy. He grew up in the land where Satyagraha was born, and Gandhi’s legacy was still very strong there. In short, there were many parallels between the life of Gandhiji and Mandela. Mandela was no doubt an ‘African Gandhi’.

Romain Rolland was a French novelist, dramatist, and essayist. Being an idealist, he was deeply involved with pacifism, the fight against fascism, and the search for world peace. He was the recipient of the Nobel Prize for Literature in 1915. Mahatma Gandhi and Romain Rol-land met in 1931. His regard for Gandhi was so great that he admired him as “another Christ.” Romain Rolland published a famous biography of Gandhiji in 1924, titled ‘Mahatma Gandhi,’ written originally in French, it was later translated into several European languages. 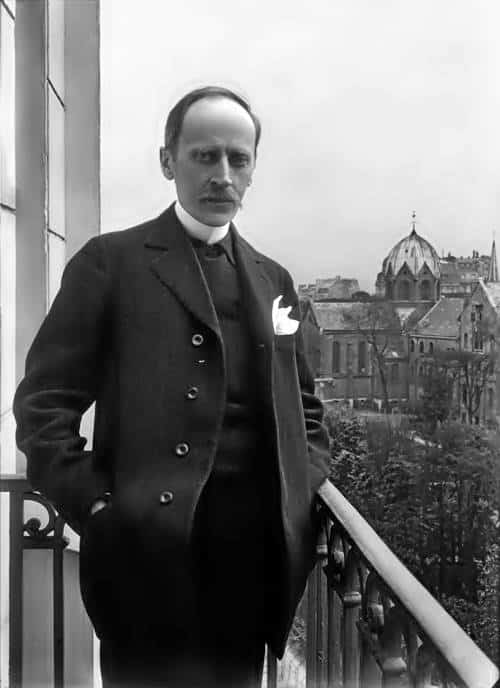 Since the publication of his biography of Gandhi in 1924, Romain Rolland remained an ardent supporter of Gandhian ideals. Rolland believed that the Gandhian path was towards international cooperation, reimbursement of the grievances of colonized nations, and a negotiating mechanism to satisfy the mutual needs of imperialistic powers and the countries seeking Independence.

Rolland read Gandhi’s books like ‘Hind Swaraj’, and articles that came in Young India, and was deeply moved by his ideas. Gandhiji and this French philosopher had many things in common. They were born in the same generation. Both were influenced by Tolstoy. Both detested violence and warfare.

Einstein was a lifelong pacifist, and so was Mahatma Gandhi. Both believed that war was an obstacle in the way of human progress. Einstein talked about Gandhiji after his death in a memorial service held in Washington, “Everyone concerned with a better future for humanity and must be deeply moved by the tragic death of Gandhi. He died a victim of his own principle, the principle of non-violence. He died because, in a time of disorder and general unrest in his country, he refused any personal armed protection.

It was his unshakable belief that the use of force is an evil in itself, to be shunned by those who strive for absolute justice”. “Generations to come, it may well be, will scarce believe that such a man as this one ever in flesh and blood walked upon this Earth.” Einstein’s words on Gandhiji stand evergreen.

Sardar Vallabhbhai Patel was the first Deputy Prime Minister of India. Patel’s meeting with Gandhiji brought a significant change in his life and brought him into the Indian freedom struggle. He met Gandhiji for the first time at the Gujarat Political Conference in Godhra. On Gandhi’s encouragement, Patel became the secretary of the Gujarat Sabha and later led the Kheda Satyagraha.

Patel supported Gandhiji’s noncooperation movement. Not only that, he supported Gandhiji’s decision of calling off the non-cooperation movement after the Chauri Chaura incident. He considered Gandhiji as a role model and worked against alcoholism, untouchability, and caste discrimination, as well as for the empowerment of women. Gandhiji and Patel developed a close bond of affection, trust, and frankness. Their relationship could be described as that of an elder brother and his younger brother. Patel was intensely loyal to Gandhiji, and both he and Nehru looked to him to arbitrate disputes.

Khan Abdul Ghaffar Khan, more popularly known as ‘Frontier Gandhi’ in India, and ‘Bacha Khan’ in Pakistan was the pioneer of a Gandhian- style, non-violent struggle against the British. He was a close friend of Mahatma Gandhi, and also a political and spiritual leader of the Muslims and the rest of the country. Ghaffar Khan met Gandhi and entered politics in 1919, during the agitation over the Rowlatt Act, which permitted the confinement of political protestors without trial.

During the following year, he became part of the Khilafat Movement, and in 1921, he was elected president of a district Khilafat committee in his native province. Soon after attending a Congress meeting in 1929, Ghaffar Khan founded the Red Shirts movement among the Pashtuns. It championed non-violent nationalist agitation in support of Indian independence and sought to awaken the Pashtuns’ political consciousness. By the late 1930s, Ghaffar Khan had become a member of Gandhi’s inner circle of advisers. Ghaffar Khan, who had opposed the partition, chose to live in Paki-stan. His memoirs, ‘My Life and Struggle, ‘ was published in 1969.

Rabindranath Tagore played a significant role in our freedom movement. He wrote the national anthem for our country. Even though Gandhiji and Tagore had differences over various matters, their patriotism connected them. Tagore was the one who first addressed Gandhiji as the Mahatma, which means great soul. Gandhiji called Tagore, Gurudev.

Tagore and Gandhiji met for the first time on March 6, 1915. Gandhiji changed the system of Congress and introduced new methods such as the non-cooperation movement and civil disobedience. Rabindranath Tagore had some differences of opinion regarding these movements, and he opposed the burning of foreign clothes. In spite of his differences with Gandhiji, Tagore respected Gandhiji for his great influence on the life of Indians.

Maulana Abul Kalam Azad was one of the most influential independent activists during India’s freedom struggle. He was also a noted writer, poet, and journalist. Azad was a prominent political leader of the Indian National Congress and was elected as Congress president in 1923 and 1940. He was elected as the president of the special session of the Congress in Delhi in 1923. Maulana Azad was arrested in 1930 for the violation of the salt laws as part of Gandhiji’s Salt Satyagraha. He was put in Meerut jail for a year and a half.

Maulana Azad became the President of the Congress in 1940 and remained in the post till 1946. Maulana Azad started a weekly called AIBalagh with the same mission of propagating Indian nationalism based on Hindu-Muslim unity. Azad was a staunch opponent of partition and supported a confederation of autonomous provinces having a common defense and economy. Like Gandhiji, partition hurt him greatly and shattered his dream of a unified nation. Azad was the first education minister of Independent India.