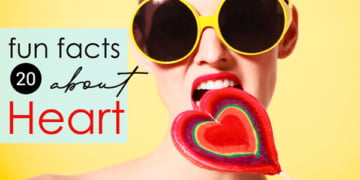 in Biology, Science
Reading Time: 4 mins read
A A
0 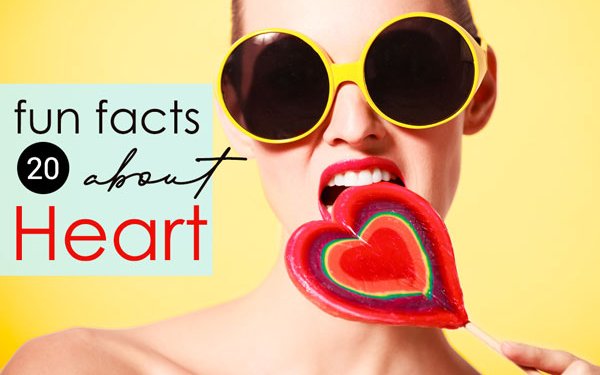 The heart is the hollow muscular organ located behind the sternum and between the lungs; its rhythmic contractions move the blood through the body. In all humans, other mammals, and birds, the heart has 4 chambers while in fishes it is divided into two chambers.

Did you know that heart-related diseases or CVD account for 32% of all human deaths around the globe as of 2015? Isn’t that scary? Here is a list of 20 Amazing Fun Facts about Heart, check it out!

#1 Xenographic transplants involve taking an organ from an animal and using it in a human being – a chimpanzee heart was transplanted into a man in Mississippi, the USA in 1964, but the patient died two hours later.

#2 Your right lung is larger than your left – this is because the left lung needs to make room for your heart. Did you know Your heart beats about 35 million times a year?

#3 The pressure created by your heart can squirt blood almost ten meters.

#4 The blue whale has the slowest heartbeat of any animal – it only beats four to eight times a minute.

#5 The heart is the only muscle that doesn’t take its signal from the nervous system – it has its own stimulator in the right atrium.

#6 The larvae of the pork tapeworm, hatched from eggs eaten in infected pork, can travel around the body and live in the brain, eyes, heart, or muscles.

#7 A giraffe has special valves in its arteries so that its blood can reach up to its head. Without them, it would need a heart as big as its whole body!

#8 About 70 milliliters (around 2.5 fluid ounces) of blood are spurted out of your heart with each beat.

#9 Your heart pumps around 182 million liters (48 million gallons) of blood in your lifetime – with an endless supply of blood, it could fill a swimming pool in less than a month!

#10 Nuttall’s poorwill is an American bird that hibernates in the winter, hiding in a crack in a rock. During this time, it uses only a thirtieth of the energy it uses in the summer and its heartbeat becomes so faint that it can’t be felt.

#11 When you sneeze, all your body functions stop – even your heart stops beating. A very long sneezing fit can cause a heart attack.

#12 Newts can re-grow body parts that are lost or damaged, including legs, eyes, and even hearts. Scientists who have studied how they do this think they might be able to persuade human bodies to do the same.

#13 In Vietnam, cobra hearts are a common snack. They can be eaten raw, even still beating, with a small glass of cobra blood or dropped into a glass of rice wine. The kidney is often included as an extra titbit.

#14 The Scottish dish haggis is made by cutting up the heart, lungs, liver, and small intestine of a calf or sheep and cooking it with suet, oatmeal, onions, and herbs in the animal’s stomach.

#15 During heart surgery in 1970, a patient with hemophilia (an inherited condition which stops the blood clotting) needed 1,080 liters of blood – nearly 15 baths full – as he kept bleeding.

#16 The poet Shelley drowned off the coast of Italy in 1822. His body was washed up, half-eaten by fish, and cremated on the beach by his friends. One of them cut his heart from the burnt body and gave it to Shelley’s wife who kept it all her life.

#17 The glass frog is lime green but has a completely transparent stomach. It’s possible to see the blood vessels, the heart, and even check whether it’s eaten recently or might like a snack.

#18 People who killed themselves used to be buried at a crossroads with a stake through their heart. It was thought that they couldn’t go to heaven, and the cross-roads would confuse their ghost so that it couldn’t find the way home to haunt anyone.

#19 A robotic caterpillar controlled by a joystick can be inserted through a small hole in the chest, and crawl over a person’s heart to inject drugs or install implants to heal any damage. Is it nanotechnology?

#20 Apart from the heart, an Egyptian mummy doesn’t have any internal organs left inside the body. The others were removed and put into separate canopic jars that were buried with it. You can continue reading 10 More interesting facts about the Human Digestive System.